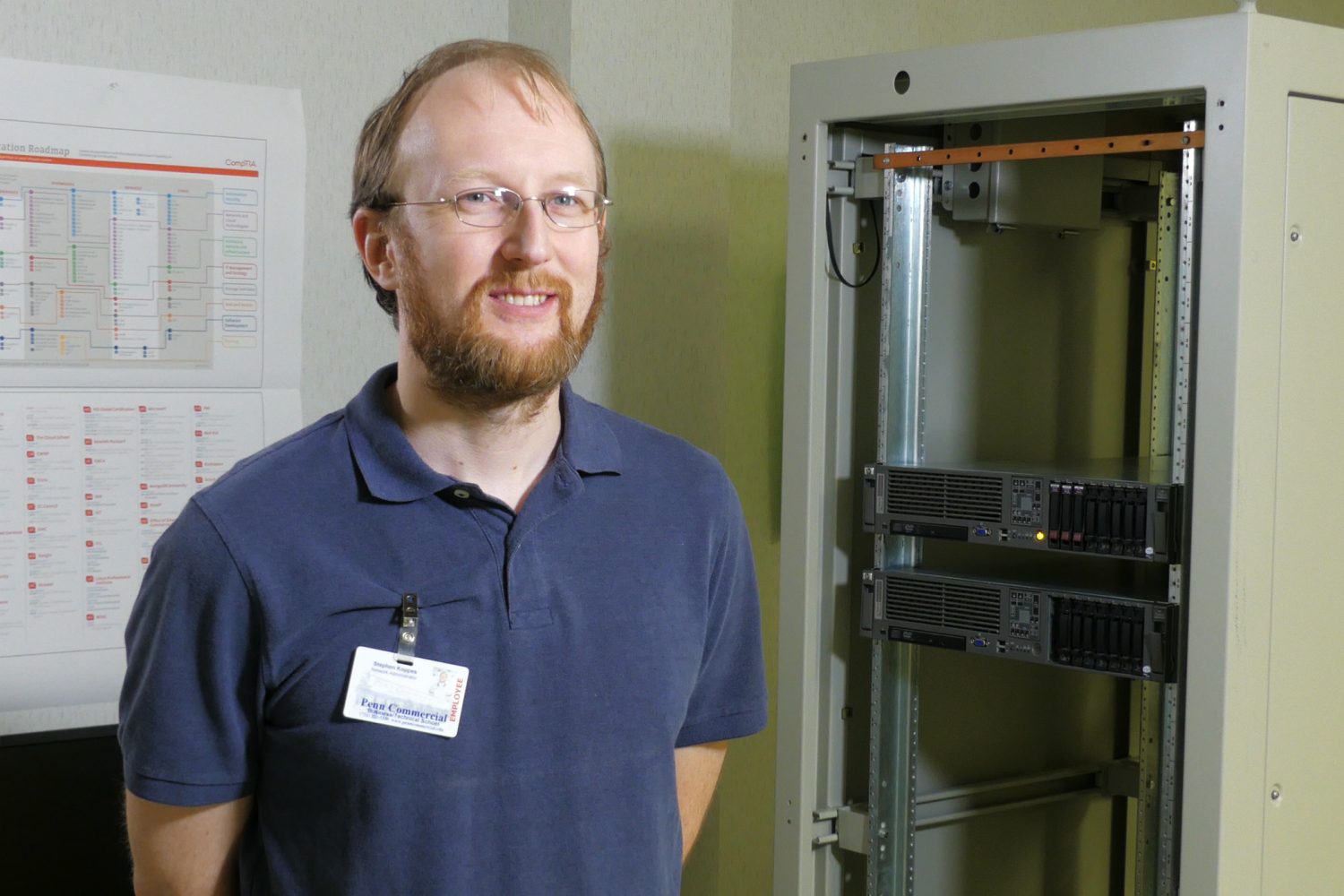 For the past seventeen years, Stephen Koppes has strolled the hallways and worked the classrooms of Penn Commercial. Prior to serving as Network Administrator and the lead instructor of the Information Technology and Security Program, he was a student advancing his knowledge of IT and computers.

“I actually started as a student here myself back in 2002, and graduated at the end of 2003,” Koppes says. “I was a student worker the majority of the time. So, I’ve been working here since about October of 2002.”

During that time, technology has changed dramatically, with the invention of smart phones, wifi, and other technologies. It has been his task to keep PC’s systems safe and up-to-date.

“My job at Penn Commercial is to keep technology running. Not only for computers, but for the other technologies as well – cell phones, laptops, tablets, student management systems, phone systems, internet connectivity, wifi,” Koppes adds. “Our Toni & Guy program, all the students have iPads. You never think how much load fifty iPads can put on wifi. It’s my job to make sure the network works smoothly for everyone, all the time.”

As the lead instructor of the IT & Security Program, Koppes gets to pass along his extensive knowledge and experience to the next generation of tech professionals. To gain an understanding of the evolving technologies, students in the IT & Security program build their own computers from scratch.

“Students do get a lot of hands-on training. In fact, part of the reason we build computers is we do a lot of the coursework on their computer as they go through the program,” says Koppes.

That coursework includes everything students will need to understand as they enter the industry as IT professionals.

“The breakdown of the program starts students off learning about computers and technology, and operating systems on them. From Windows to MacOS to Linux, because those are everywhere these days. Working with Windows Server, and common office applications such as Word, Excel and Access. We work with mobile devices such as Android and Apple. We get into wireless technologies, network technologies, databases such as SQL server, Microsoft Powershell, VoIP – and other technologies students find in businesses.”

There are multiple types of jobs within the Information Technology field. And the industry continues to grow as technology evolves and companies become more dependent upon technology to conduct business.

“There are programmers, system administrators, back end administrators. There are database administrators, general technicians, help desk personnel,” Koppes continues. “Companies have so many responsibilities, and so many things that we have to do, it’s hard to know where someone wants to specialize. So the goal of our program is to give them a broad introduction to all of the technologies and facets of I.T. that are out there.”

Koppes’ goal is not just to train people in I.T., but to get them excited about technology and all the advantages it has to offer. “What I like about teaching is being able to help people learn about technology,” Koppes says. “Technology is everywhere.”

“As IT professionals, we’re often the unsung heroes that nobody cares about while everything is working.”

For more information about the Information Technology & Security Program, visit our webpage here.

Learn More About Our Programs!